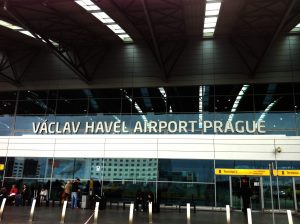 The Václav Havel Airport Prague is located 20km (12 miles) northwest of Prague. There are two terminals: Terminal 1 is designated for flights outside of the Schengen area, Terminal 2 is designated for flights within the Schengen area (basically all EU countries except for Great Britain). So, if you arrive directly from overseas, you will most likely arrive at Terminal 1. Ifyou arrive through any large airport in Europe (except for London), you will most likely arrive at Terminal 2. Both terminals are connected by a hallway and are about 5 minutes walk apart. The airport offers all usual services. The information desks are located in both terminals. There is a bank as well as several exchange offices and ATMs at the airport.

Transport from the airport

For more information how to get to the center of Prague by public transport you can go through this page.   If you are planning to go by taxi, have a look here.

Delayed and Lost Luggage
A dispatch company will pick up delayed luggage and arrange its transport to the given location within 8 hours from the luggage arrival at Prague Airport.

Emergency contacts:
We really hope nothing bad happens during your arrival to Prague, however, in case you have any problems regarding your arrival, lost luggage, transport to the hotel, at check-in, or with anything else, please, contact us. We will be available to help you at any time. Please, contact us on our cell phones (from your U.S. cell phone, dial the number as written below; from a Czech public phone machine, you do not need to dial “+420”):

Weather
The weather in Prague will average in the mid-60s to low-70s during the day and mid-40s to low-50s at night. Avoid bringing a heavy jacket and bring a light jacket instead, so that you can layer your clothing. The heaviest rainfall is in June, so a waterproof jacket, good walking shoes and a small travel umbrella would be practical. For the current weather forecast for Prague, visit the web page CzechTourism.com. The Norwegian server yr.no is also very accurate in forecasting weather for any place in the world (in English).

A pair of strong and comfortable walking shoes are a must!

Dress code for the two weeks is casual, so jeans are okay, but you may want to bring one or two nice outfits to wear for various cultural events (dinners or music concerts). Refer to the weather information for other clothing info.

Language
The only official language in the Czech Republic is Czech, which is spoken by 96 % of the population. However, have no fear, as especially in larger cities you will be understood in English relatively easily.

Currency Exchange
Czech crowns (CZK) are easily obtained from any Czech ATM machine via an ATM card, or from non-stop exchange offices at all Czech airports and at most major train stations. You can find the approximate conversion rate at Universal Currency Converter.

You can change money in the Czech Republic in many places but never do it on the street!
When changing money in banks, you will pay a fee of 2% of the total sum as commission. In certain banks there is a minimum fee of 50 CZK ($2.50). You will pay this fee only when the 2 % commission amounts to less than the minimum fee. In private exchange offices it is recommended that you first ask for the exact sum you will receive for your money: the sign advertising 0 % commission often relates to converting CZK to any foreign currency! A fair exchange office (called EXCHANGE) is located straight in the centre of Prague, opened 9am-8pm every day and charges no commission. See the map for its location. This exchange office does unfortunately not offer any special deals on exchange rates. There are also many other small exchange offices offering the same exchange rates and charging no comission. Just be careful to look for them.

In the Czech Republic you will find a dense network of ATMs (cash machines) which will accept all major credit and debit cards (Visa, MasterCard, Plus, Maestro, Cirrus and others). The majority of shops and restaurants in Prague also accept cards.

Time Zone
The Czech Republic lies in the GMT +1 time zone, usually referred to as Central European Time (CET), as well as Berlin, Bonn, Budapest, Frankfurt, Paris, Rome, Vienna, Warsaw and the others. The clocks are changed by one hour creating winter time and summer time (GTM + 2). Etc., it is:

Emergency
In order to comply with European Union regulations, the Czech Republic has adopted a new number for emergency services. This number, similar to the “911” in the US, works for ALL emergencies, including medical, fire and police. The operators will be able to speak not only Czech, but also both English and German.

Living costs
Food is generally cheap in the Czech Republic. If you eat out, expect to pay 100 – 150 CZK for a meal and a drink at a local pub, 200 – 300 CZK at an average restaurant and from 500 CZK up at more upscale restaurants.

We will provide Prague public transport passes for you, so you do not need to worry about that.

Telephones
The international dialling code for the Czech Republic is +420 (or 00 420). When calling Czech numbers from abroad this code must be dialled first, followed by the 9-digit number.

Mobile phones
There are three mobile phone operatorsin the Czech Republic (O2, T-Mobile and Vodafone). Almost 100% of the country is covered by the mobile signal. The network uses the GSM 900 and 1800 system. This is compatible with the rest of Europe and Australia.

Some problems can arise with handsets from North America and Japan. Find out before you leave home what type of phone you have and activate the roaming service provided by your operator.

All threee operators sell pay-as-you-go SIM cards charged with a certain amount of prepaid credit (300-2000 CZK). These are useful for medium length visits. In order to use a Czech SIM card you will need to have a telephone which has not been blocked by an operator.

Electricity
Electricity AC in the Czech Republic is 230 volts. Neither current nor plug sizes are the same around the world. If you findthat an electrical device has a different plug to those used in this country after your arrival, adapters are readily available. For more information, please, see the article Electricity in Europe.

Safety
Violent crime is still rare by the standards of western Europe or the United States, but there is a great deal of theft. Lock your car and leave your valuables in the hotel. Be alert to the danger of pickpockets in crowded places, particularly on trams and metro. Prague is plagued with unscrupulous cabbies. Hailing a taxi on the street can be equated to asking for trouble, but ordering a taxi through by phone is safe, especially using the AAA Taxi operator (dial 14014). It is recommended to carryphoto copies of your official documents (passport, etc.)in case you lose your belongings during the trip.

Getting around
The transport network in Prague is very well developed.  There are buses, trams and metro. Transport tickets , which you will receive from during the orientation meeting, are valid for all means of transport except for Airport Express shuttle bus (AE). For more information, see the Prague Public Transport website. Or see the Prague public transport map.

The taxis could be problematic. Better be safe and if possible, avoid taking a taxi straight from the street. They could cheat you out of money. It is always better to call for a taxi. We recommend the AAA taxi (phone number: 14014). When taking a taxi, always ask for the price ahead of time and make sure their meter is turned on. A trip from the airport to the centre of Prague might cost around 500-600 CZK. Any decent trip within the centre of Prague should cost around 300 – 400CZK, depending on the distance and the time of day. If you find the price too high, do not be afraid to go ahead and ask a different taxi driver.

If you plan to go on a trip out of Prague, you can use buses or trains. Both are safe and comfortable. Again, there is a very well developed network of regional public transport in the Czech Republic, do not be afraid to use it. You can find  the timetable for both trains and buses at http://jizdnirady.idnes.cz/vlakyautobusy/spojeni/. Do not be afraid of the language, you can swith to English in lower right hand corner (cannot be easily found on smaller screens).

Going out
If you would like to go to concert, theatre, film, club, gallery, exhibition, etc., check the following websites:

Eating out
Here is a list of restaurants we recommend in the centre of Prague.